David McCallum began his playing career in 1957 in Melbourne as a member of one of Australia’s earliest rock ‘n’ roll bands, the Blue Bops. In the 1960s he was a member of the very popular John Hawes Band who played hard-driving traditional/mainstream jazz. 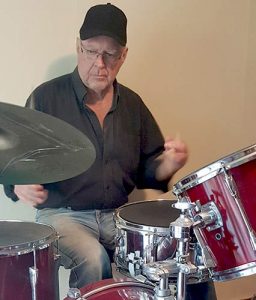 During the early 1970s he ran his own band, the Dave McCallum Power Set, which performed regularly on the Melbourne dance scene, made TV appearances and performed in concerts backing many well-known artists of the time including John Farnham, Russell Morris and Ronnie Burns.

Dave arrived in Brisbane in 1974 and quickly established himself in the local music scene. In the 1980s and 90s he worked consistently with Mileham Hayes’ bands playing concerts, TV and clubs throughout Queensland. He performed with jazz greats Graeme Bell, Bob Barnard, James Morrison, Ruby Braff, Herb Ellis, Wild Bill Davison, Kenny Davern and many others.

He was also a long-time member of UTR (Up The River Jazz Band) who held down one of Brisbane’s longest running regular gigs at the Story Bridge Hotel.

Dave’s distinctive, driving style of drumming brings a different feel to the ever-developing sound of the band.