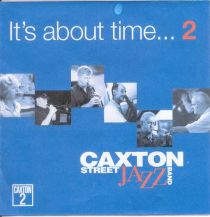 Caxton Street Jazz Band It’s About Time … 2 On the band’s own label – see www.caxtonjazz.com.au. There’s an easy relaxed feel to this remarkably talented band that comes from longevity – no – they’re not all eighty five – but they have played together for around 30 years! And an added factor is that they’re all highly accomplished musicians able to experiment, to be adventurous and not fall off the high wire – if you know what I mean. Their programme is admirably varied – ranging from swing to pure 1920s nostalgia and – as you can probably gather from the above – they’re equally at home in all the genres. Standouts for me were the super piano of Bernice Haydock and the trumpet of John Braben. If you are ever in Brisbane (that’s Australia) check them out at the city’s jazz club – otherwise buy this CD – why not do that anyway – you’ll enjoy its happy bounce and delightful variety.

To appease those who prefer live recordings and those who prefer studio recordings, this CD will suit both, as half the tracks were recorded in front of an audience of 200 at the Brisbane Jazz Club, and the other half at the same venue but under studio conditions. But to all listeners, you can’t tell the difference, as the audience is not intrusive, and the fact it was recorded on home territory puts the band at ease.

This is only the second CD from this very competent Australian band, and it is released to celebrate their 30th anniversary. As with Volume 1, reviewed in “Just Jazz” last year, the band romp through the tracks on the CD. The tunes are certainly not the usual Traditional fare, which makes it a very pleasing listen. Pianist Bernice Haydock has a very pleasant singing voice, not dissimilar to Ottilie Patterson, and her contributions are first class.

I like this band, and I’m sure our readers would as well, so please try and get a copy from somewhere.