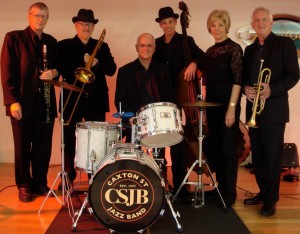 The Caxton Street Jazz Band was founded in Brisbane in 1977 and is today recognised both locally and internationally as one of Australia’s leading jazz bands. Now in its 40th year, the band presents hot, swinging jazz in a manner that elicits enthusiastic responses from listening and dancing audiences alike. Members of the band include some of Australia’s leading jazz players in their idiom, as well as two instrumentalists who are also vocalists.

The band’s name derives from the location of its first venue, the Baroona Hall in Caxton St, Brisbane. The band rose to prominence in the ‘80s through its long running stint at the famous “Jazz ‘N Jug” sessions at Brisbane’s Caxton Hotel, as well as numerous appearances in this period at Australian Jazz Conventions and other Festivals.

The Caxton Street Jazz Band is a 6-piece band that not only appeals to jazz aficionados, but also to the general public at large. The inspiration for the band is the classic hot jazz of the early 20th century. This music receives no public recognition or airplay in the current era, and is little appreciated by the general public. However when presented in public by the Caxton Street Jazz Band, it is received enthusiastically. This has inspired the band to confidently take its music to non-jazz audiences with the knowledge that the pleasure the musicians get from performing it is matched by the enjoyment of the audiences, and that the band has advanced the public appreciation of classic jazz just a little.

While the CSJB’s roots are firmly planted in the hot jazz of the early 1900s, many other influences are represented in its output. These include big band swing, mainstream jazz, folk, country, rhythm and blues, and popular tunes of the 30s, 40s and 50s. The band sets out to give this music a fresh new edge that appeals to today’s audiences. The variety of the CSJB’s repertoire has in part been responsible for the band’s unprecedented popularity in recent years, with demand for its performances coming from jazz festivals, jazz clubs, and community and private functions throughout Queensland and northern and central New South Wales. The band’s ability to stay true to its roots while still being able to entertain is testament to the quality of the music and musicians, and shows that jazz can have wide public appeal when performed in the manner of the Caxton Street Jazz Band.

The CSJB appears at all nature of functions, from fundraisers, to club/pub jazz events, dinners, balls, weddings, corporate functions and promotions, and private parties. The band’s versatile repertoire (which is demonstrated on its CDs, “It’s About Time”, “It’s About Time…2” and “Live sessions at the Brisbane Jazz Club”), and its tight and hot playing supplemented by attractive vocal performances have much to do with its appeal to a broad range of audiences and age groups.